So I explained him the same, and suddenly I thought why not I post the difference between both in my blog ??


Above the line sales promotion

ATL is a type of advertising through media such as television, cinema, radio, print, web banners and web search engines to promote brands. This type of communication is conventional in nature and is considered impersonal to customers. It differs from BTL advertising, which uses unconventional brand-building strategies, such as direct mail and printed media (and usually involves no motion graphics). It is much more effective when the target group is very large and difficult to define.

Below the line sales promotion

BTL sales promotion is an immediate or delayed incentive to purchase, expressed in cash or in kind, and having short duration. It is efficient and cost-effective for targeting a limited and specific group. It uses less conventional methods than the usual ATL channels of advertising, typically focusing on direct means of communication, most commonly direct mail and e-mail, often using highly targeted lists of names to maximize response rates. BTL services may include those for which a fee is agreed upon and charged up front.
BTL is a common technique used for "touch and feel" produ (consumer items where the customer will rely on immediate information rather than previously researched items). BTL techniques ensures recall of the brand while at the same time highlighting the features of the product.
Another BTL technique involves sales personnel deployed at retail stores near targeted produ. This technique may be used to generate trials of newly launched produ. 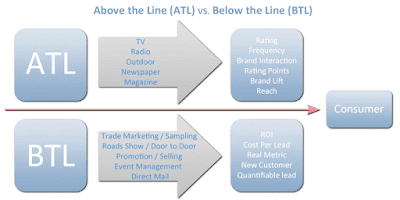